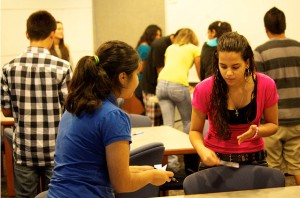 We don’t know much about Jesus growing up but a good part of what we do know is in Luke 2. There is a fascinating event that effectively illustrates a principle of collaborative connection, especially the need to renegotiate that connection as he grew.

It was Jesus family’s custom to go to Passover each year and when he was 12 years old and ready to move from boyhood young manhood, Jesus did something very disruptive.

When his parents left to return home, he decided to not go with them but to stay in the temple asking questions. He could have told them his plan but they very probably wouldn’t have let him.

Instead they assumed he was in the caravan with relatives and after a day, when he didn’t show up, they got worried and returned to Jerusalem.

They spent a very significant three days searching for him. (Does that time period ring a bell?) I wonder as those days progressed if their assumptions grew progressively more desperate? Did they start looking in the playgrounds and ended up checking the morgue? They did finally find him in the Temple with the elders and it must have seemed quite odd. Of course they were upset, as their imagination had moved them from thinking him lost to thinking him dead.

And isn’t that how it works? In certain environments all the assumptions are made of what one can or can’t do. It takes a dynamic shift, a forceful discontinuity, to get the players to the point where a different way of looking at possibilities can emerge.

The boy Jesus had to die in their minds, in order for the man Jesus to take the next step in fulfilling His destiny.

Not everything can be negotiated ahead of time concerning the collaborative connection. Sometimes it takes disruptive action that is stressful and in the short-term incomprehensible. But it leads to a new collaborative space where much more can be accomplished together.